I’m a little fascinated with Broadway. Not New York’s Broadway…Fresno’s Broadway Street just north of Ventura St., right at the junction of Inyo Street and Chukchansi Park. In this unassuming little pocket of Downtown Fresno, stands four businesses that specialize in four different things, but also are experts in bringing a great personal touch to their trade.

The first one I’ll share with you is Pool Tables R Us. Owned and operated by Danny Toledo and his daughter Anna, Pool Tables R Us first opened in 1995 on E Street in Chinatown. Previously, Danny had worked for another vending machine/pool table company and made quite a few contacts. When he branched off onto his own, he knew that Downtown was a great central location to base his operations. He started in Chinatown on E Street, then relocated to his showroom on Broadway.

One day, Danny asked his daughter out to lunch. When they finished, she came by the showroom and helped out by answering phones. And she’s been working there since then.

Anna says she enjoys the business and the location. She likes selling and renting a variety of products including jukeboxes, poker tables, air-hockey tables, keg-erators and electronic dartboards. She says they also repair pool tables. Slate top tables, which are the best type, are heavy and need to be carefully leveled. The pool table “playing field” surface felt needs to be replaced sometimes as well as the side bumpers, or “cushions” as they are called. 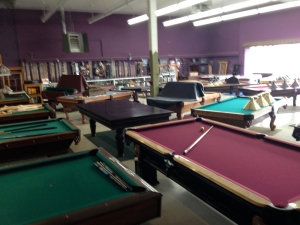 Plenty to see at Pool Tables R Us, go check ’em out. 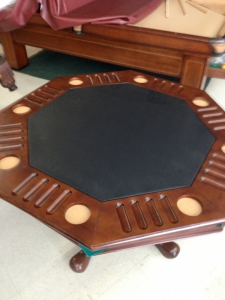