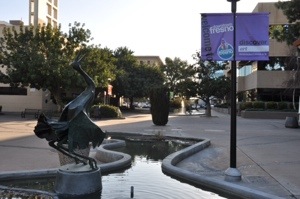 Three to four times per week I ride my bicycle to and around the Fulton Mall. These up close encounters combined with the controversy surrounding changes to the mall, caused me to think about my former college professor and Fulton Mall landscape architect, Garrett Eckbo. I understand it was one of his favorite projects. As I contemplated how Mr Eckbo might feel about the Mall’s problems, I decided to find an almost forgotten personal note he gave me about 36 years ago in response to a presentation I gave at an educational conference in Newport Beach. “Thoughtful” was less complimentary than I remembered, but I’ll take “thoughtful” from Garrett Eckbo. 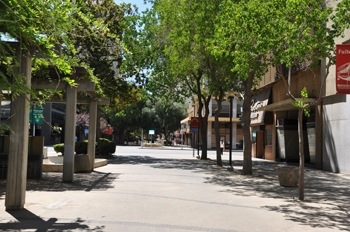 We all knew him to be introspective and already firmly established as one of a handful of the most important 20th Century figures in Landscape Architecture. His contemporary, Robert Royston described him as “… a clear and social thinker, and he can really see the whole picture.” I wonder how Garrett Eckbo would perceive our current “whole picture” in Fresno?​
There are indications he would be analytical and not nostalgic. He believed, “Design shall be dynamic, not static. We do not want to live in a static world.” He advocated “use of the best available means to provide for specific needs of the specific inhabitants.” His biographer wrote of Eckbo, “Critical of past thinking, not so much for its role in earlier times, as for the way older landscapes exerted their influence of twentieth century conditions – conditions obviously greatly altered. We must ask why we turn to the distant past for solutions to the problems of today. Instead, Garrett Eckbo would direct us to learn from society and the site – with faith in our ability to create our own landscapes appropriate to our own situations and times.”​ 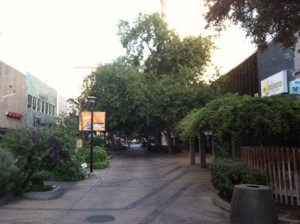 I fantasize that my former college professor could ride with me and look at the Fulton Mall today. As he neared the end of his life in the late 20th century he wrote, “ The landscape architects and conservation people are focused on green open space within, around and between cities, and the salvation of the natural landscape. This is all well and good, but it misses the chief point of contention in the world landscape – the gap between structural and landscape visions. The former embodies the central outlook of the leading business/economic view of the world. It tolerates landscape visions but if they get in its way, will not hesitate to ride over and destroy them. Its way embodies maximum profit for the chief protagonists. The only way to save this world from the implications of this split attitude is to merge the two visions into a social/cultural/natural approach. That is the task for the ongoing century.” And that is our task in Fresno. Fifty years of legacies and innate strengths on the Mall can be honored and even celebrated, while adjusting to today’s reality. While not our first preference in a perfect world, changes involving returning some auto traffic to the Fulton Mall is currently an action that I support and it is not unfathomable to me that Garrett Eckbo would agree. As Mr. Eckbo stated more than once, we should learn from the site and society, and apply our best abilities and creativity for the best landscape for this situation at this time.