Lots of people have that pair of shoes or boots that they just can’t give up.  You know, the  “Worn & Loved So Much The Soles Are Wearing Out” pair.

How about keeping them even longer by bringing them to Fresno Shoe Repair? Hovik Shishoyan opened up Fresno Shoe Repair in the Crescent Building on Kern Street almost a year ago and he’s found a steady client base with downtown workers and residents.

Looking around Hovic’s shop, you’ll notice the other things he offers: a full rack of clothes just returned from drycleaning and another rack of shirts and pants ready for alterations. By the way, Hovic’s shop on Kern Street offers the easiest access to dry-cleaning services anywhere downtown, easy drop off and pick up.

I spent a morning with him and watched him in his tool-filled workshop, greeting each customer as they came by with his gentle hello.

First customer of the morning was a uniformed Fresno police officer, who was having a couple of pairs of service boots re-soled. Later, a woman came in who needed leatherwork to repair her purse. Her girlfriend was excited to note luxury-style purses Hovic had on display alongside women’s and men’s shoes.

Another woman peeked into the door to ask if Hovic could repair a belt. Sure enough, Hovic was on it. I watched him pick the tools and materials to make the repair. A number of large grinders and presses line the walls of his shop. 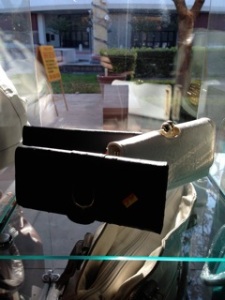 Hovic learned how to cobble from his dad who had a shoe repair business in Armenia. After moving to the States, Hovic equipped himself with a business degree in Fresno and decided to follow the family trade. Hovic says he enjoys his life in Fresno and is very glad to have his business in the Crescent Building, part of the Civic Center Square. We’re glad Hovic finds Fresno a good place, too.