After a strong 1.5-year run, Fresno Brewing Company (FBC) closed its Fulton Mall doors. Fans had the chance to enjoy the pub one last time, last Tuesday, for Brew Bingo. 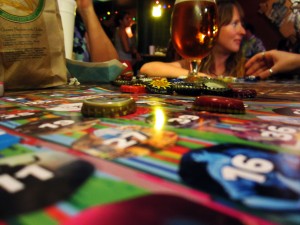 Brew Bingo takes place the 2nd Tuesday of every month. It’s a celebration of beer, Bingo, and prizes. Uncle Kenny (I’m not related to him but I’m going to call him “Uncle Kenny” like my mom’s generation called Walt Disney “Uncle Walt”) was the local celebrity caller for last Tuesday’s Brew Bingo. He dressed up as Santa Claus…or is he the real Santa Claus? 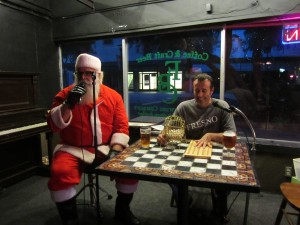 I felt bitter-sweet walking inside FBC, one last time. The pub/cafe was proof that revitalization is possible. During my first tour with Downtown Academy, last year, we stopped at FBC. The owner, Ephiram Bosse, spoke to us downtown newbies. He said something that, to this day, still sticks with me: “Revitalization is not coming. It’s already here.”

The last Brew Bingo was special because it marked a great beginning. Craig Scharton and Michelle Wong introduced plans of a new business that will take over FBC’s location. The business is called Peeve’s Public House & Local Market. Peeve’s is named after Craig’s dog, Peeve (his “pet peeve.” Ha!). Craig Scharton is the business owner and Michelle Wong (I’m convinced she’s Wonder Woman of downtown Fresno) will be the manager. Peeve’s Public House will be a pub/restaurant. The space next door, Fulton Cycle Works former space (now located at Iron Bird Lofts in downtown Fresno), will be a market for local food.

Craig was not planning on opening a business anytime soon. “Sometimes, the best things happen when you are not planning it,” Craig says about this unexpected opportunity. The idea for Peeve’s came along when he witnessed a strong sense of community and enthusiasm at FBC. “They can’t stop,” Craig said about FBC, “There’s too much good here.” Craig decided to step in and continue with FBC’s momentum. At the same time, he thought of ways to build upon their business concept.

A ONE STOP SHOP

Craig wants Peeve’s to be a place that represents everything that is great about the Central Valley.

The local market side of the business is meant to introduce food-related businesses to downtown Fresno. A lot of people want to pursue their dream of opening a business but don’t know how to start in an affordable manner. Or they do not know how to increase the exposure of their product. The recent implementation of the California Homemade Food Act makes it easier for people to sell their own food. Craig hopes that businesses will expand and locate to their own storefront on the Fulton Mall.

So, what is new? Plenty!

IT TAKES A COMMUNITY

Craig and Michelle’s ideas made the entire room excited for the future. They bluntly stated the reality: they cannot make Peeve’s successful on their own. “For this to work,” Craig said, “it’s going to take effort from the community.”

Community. That’s a key ingredient most of us do not think about when it comes to running a business. Peeve’s is no different. The first step we can do is create buzz about Peeve’s on the social media. Social media is the easiest and most effective marketing tool for local businesses. It takes one click to “like” a fanpage. One click to share a status or an article. These simple actions will increase the amount of people who know about Peeve’s.

Craig wants Peeve’s to be a place where the entire community is free to voice ways to improve the business. The community’s creativity is what gives him confidence that Peeve’s will be successful.

Our patience and flexibility is also needed. “Hang in with us,” Craig requests. Some of his ideas will not work. Other ideas will be not a reality right away. The least he can do is put all his effort into promoting an event or idea.

Location 1243 Fulton Mall (FBC former space; near the north end of the Fulton Mall) Click here for a map.